A successful trapping session can remove at least 90% of the resident grey squirrels in the garden or wood at the time. It is possible to achieve this by simply setting out the traps and visiting them daily to check the catch. A period of pre baiting is essential to give the squirrels a chance to find the traps and become used to feeding from within them. The presence of animals feeding at traps will attract others passing through the tree canopy down to the ground. As traps on pre-bait are only visited every other day, there is less human disturbance than when traps are set immediately and visited daily.
Pre-baiting lasts for a minimum of five days after which the traps are set for a period of four to five days. Without a pre-bait period it may take two to three weeks to catch the squirrels with a daily (preferably twice-daily) visit necessary throughout. 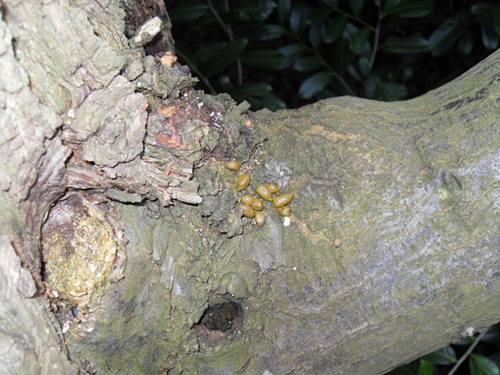 Fresh grey squirrel droppings in a large woodland close to a pre-bait area.

Experience will determine the most productive sites and be far more effective than placing traps to a regular grid. The trap sites are normally laid out to form a trap round which may use existing tracks, paths or rides for convenience. However, to avoid or minimize vandalism, sites should be chosen to ensure the traps are not visible from the track, particularly in woods with high public access. Single capture traps may be more easily camouflaged by placing them in a bank or tunnel, singly or in pairs. Leaving both ends uncovered encourages squirrels to investigate the ‘tunnel’. In areas where it is difficult to draw squirrels to the ground, for example, pine mixtures, or where traps are disturbed by badgers, deer or wild boar, it may be necessary to site Fenn Tree Traps, Fenn Bird Box or KANIA2000 traps on the trees. 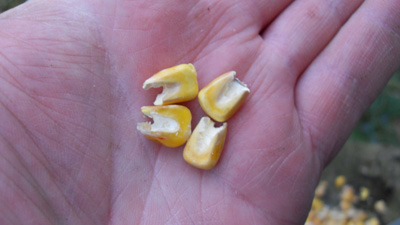 Grey Squirrels will only eat the maize kernel

At the chosen site, level an area of ground where you want to place a trap. Lay the trap so that the wire mesh floor of the trap is flush with the ground. If possible, use a metal ‘bait tray’ attached to the bottom of the trap, to minimize the loss of bait to mice. Secure the trap by staking or pegging it down, and leave the trap with the door held open. At this stage the trap should be open but not set. Put two handfuls of whole maize in the main body of the trap, and scatter several handfuls on the ground around the trap cover with branches and leaves. Continue to bait with maize inside the trap and around the entrance for at least five days. Grey Squirrels will only eat the germ of the maize and this can be used to the trapper’s advantage to show whether squirrels have visited a site. 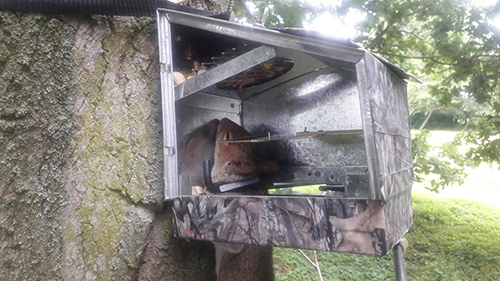 Grey Squirrel caught in a Kania 2000

After the five day pre-baiting period, set the trap. Check that the treadle mechanism is working properly and place a few kernels of maize at the back of the trap and at the entrance. Re-cover the trap. Once a trap has been set, it must be visited at least once a day if not twice in highly populated areas ideally a couple of hours after dawn and at dusk. When you check the trap despatch any squirrels as quick as possible to minimize stress, (see despatch section for humane methods. Re-set trap as before and bait. After four or five days of trapping in an area if squirrels are not being caught, remove the trap and if necessary re-site it elsewhere and repeat the procedure. 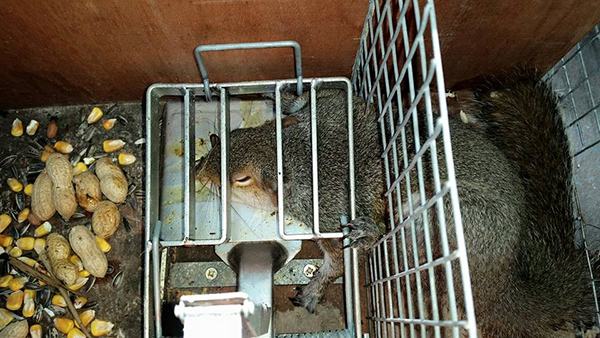 Grey Squirrel caught in a DOC 200

The best time of year for trapping grey squirrels is between March and September, when their natural food is scarce. During autumn the availability of nuts, berries, fruits and cones significantly reduces the likelihood of trapping grey's, with foraging activity tending to be limited on cold winter days. 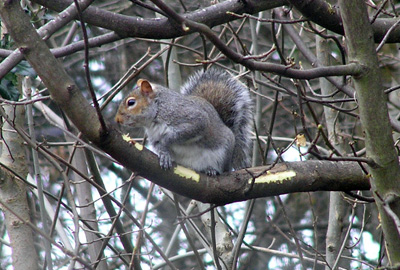